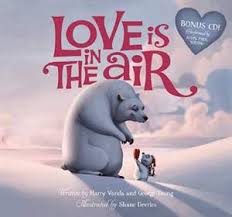 
Who could forget the strains of John Paul Young’s ‘Love is in the air’ on the Strictly Ballroom soundtrack?

Quintessentially Australian, this song conjures up many  long held and treasured memories. Bad hair and lay over 80’s clothes are perhaps some that we would rather forget though!

Scholastic brings us ‘Love is in the air’ with bonus CD just in time for Mothers’ Day.  The classic song as been re-birthed into a delightful story about a baby polar bear who leaves his mum to go on an adventure to see the wide world.

After his worldwide travels, he returns to the arms of his mother knowing that it’s something that he must believe in…and it’s there when he look in her eyes!

Love is in the air!